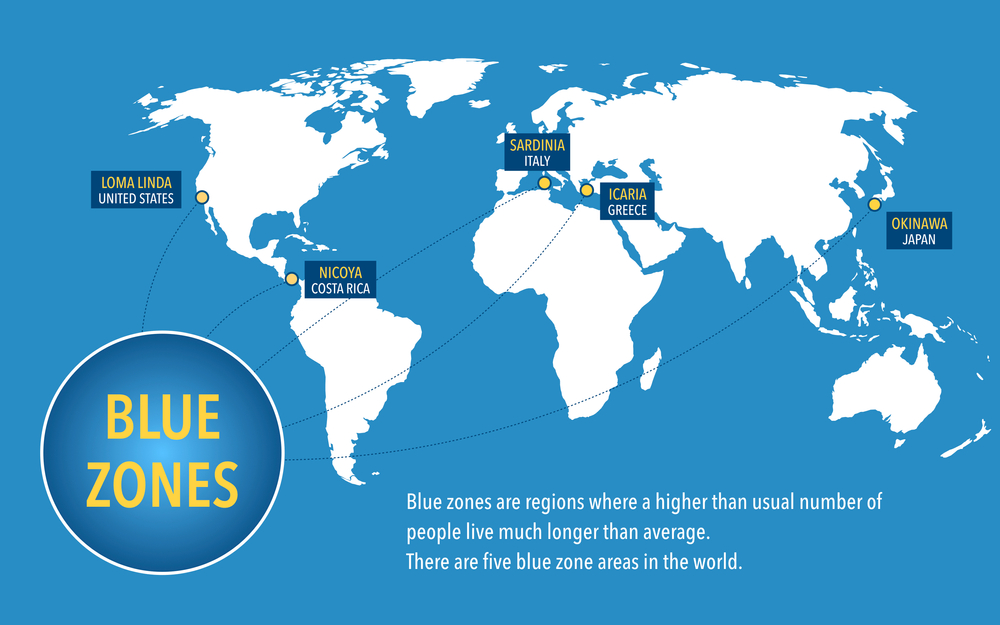 Genetic factors like a family history of diseases or an increased immunity to certain health problems influence your longevity, but not as much as your lifestyle would. This is one reason why people who reside in geographical spots commonly known as “blue zones” tend to live longer, healthier lives.

In this article, we’re going to tell you all you need to know about these places and how they could help you extend years of your lifespan.

Blue Zones: What are They?

Simply put, blue zones are places in the world that could be described as “centers for longevity”.

Coined by writer Dan Buettner, the name “blue zone” comes from Buettner and his team encircled regions on their maps with blue ink while researching which places on Earth had residents with the longest lifespan.

Where are These Blue Zones?

Buettner was able to identify 5 Blue Zones on our planet, with each of them sharing common traits when it comes to their eating habits and daily routines. You’ll find them below

Holding the distinct record of having some of the oldest female residents, Okinawa’s soy-heavy diet and affinity to the ancient practice of tai chi grants it that rare “blue zone” label.

With a diet rich in olive oil, all-organic and homegrown vegetables, and red wine to wash it all down, Buettner identifies Icaria as another one of these places.

As a sort of counterpart to Okinawa, Ogliastra boasts the reputation of having the oldest male residents within the province, and this is thanks in part to the overall terrain along with their agrarian lifestyles.

With the region’s popular mantra of plan de vida (a life plan), residents of Nicoya achieve impressively long lives with dedication to physical work and a dietary staple of corn and various beans.

The places mentioned above qualify as blue zones due to the fact that these places have an unusually high number of residents whose age range between 90 and 100.

The question is: what exactly makes these places contribute to the longevity of their residents? We break down each and every common denominator between these five blue zones.

Be it on the mountains of Ogliastra or the cool plains of Okinawa, one thing is shared by all these places: their diet almost fully consists of plants—around 95% to be exact.

That is not to say, though, that majority of people living in blue zones are vegetarians. Rather, it’s more apt to say that they limit meat intake to as little as five times within any given month.

And there is scientific evidence to back this up: one study reveals that the consumption of meat is a contributor to health risks, such as cancer and heart disease.

In lieu of meat-heavy meals, blue zones instead prefer foods like the one you’ll find below.

Long considered a wonder food, nuts provide high amounts of protein, fiber, and healthy fats (monounsaturated and polyunsaturated ones). So much so, that they’ve been linked as important contributors to reversing metabolic syndrome.

Whether its green and leafy or long and purple, vegetables are an undeniable source of much needed vitamins and minerals that could help protect you from various diseases.

Whole grains like wheat and oats are not just rich in fiber, but are also great supplements when it comes to lowering your blood pressure.

Beans and lentils, much like nuts, are rich in amino acids, proteins, and fiber. All the while, they have very low fat cholesterol, which makes them perfect dietary staples within blue zones.

Knowing what to take is just half the battle, as there are specific ways with which people living in blue zones go through their meals; it’s also a matter of how they take their food and drink.

As such, fasting and low caloric intake plays a large part in extending the lives of blue zone residents.

This couldn’t be more apparent in Okinawa, where—aside from reducing the calories they put in their bodies—also follow hara hachi bu, a traditional dietary method where they only eat and drink until they’re almost full.

In doing so, the lower caloric intake from this 80% rule provides you with lower chances of gaining weight and all the associated problems that come with it, such as a reduced risk in getting diabetes or heart problems.

Fasting in the Zone

Complementing calorie reduction is fasting, periods where overall food consumption is reduced, if not totally removed.

Although primarily done as a religious act, which are common with Seventh-day Adventists and the Orthodox Christians of Icaria, fasting has significant medical and therapeutic benefits.

Be it intermittent (within certain days in a week or a few set hours within a day) or continuous (wherein individuals stick to water for consecutive days within a month), it is undeniable that the practice contributes in overall longevity within blue zones.

One particularly amusing aspect of the blue zone lifestyle is that very few of them have abandoned alcohol consumption entirely. Some of these places have, in fact, made red wine a staple in their respective diets.

The health benefits reaped from drinking alcohol could be traced to two primary factors: volume and type.

When it comes to volume, you won’t see any bingers within blue zones; instead, residents from these places usually make it so that they consume just about a glass or two per day. But that’s just half of the equation.

The type of alcohol one takes in their body also plays a large part here. In this case, red wine, which has generous amounts of antioxidants in them, are the drink of choice for these blue zone inhabitants especially if you’re looking at Greece’s Icaria or Italy’s Ogliastra regions.

That’s because antioxidants are natural agents that protect the body’s genetic structure, which leads to lower blood sugar levels; a decrease in blood pressure; and, ultimately, a decrease in the rate of the aging process.

A Zone of Fitness

Physical activity also plays an integral role in extending the lifespans of people living in their respective blue zones.

For one, regions like Okinawa, the Nicoya Peninsula, and Ogliastra have very agricultural industries where inhabitants more or less occupy professions in the field of farming or livestock. And these jobs demand higher physical activity compared to other occupations.

As a result, these blue zone residents tend to expend more energy on a daily basis compared to individuals living in urban centers with jobs that require little to no physical exertion, such as being in an office or in front of a desk.

And with said exertion comes all the benefits that one could get from, say, exercising regularly. That means you get to burn more calories; increase muscle mass and overall endurance; and provide proper maintenance for your body.

Suffice it to say that blue zone residents are able to fill in the prescribed exercise time per week adults need in order to reduce the risk of contracting heart disease and even going so far as to improve their lifespan by as much as 20%.

The Value of Rest

As with moderation in drinking alcohol, one must also temper strenuous physical activity with periods of rest and relaxation.

Blue zone residents put a lot of stock in the benefits of having a nice, adequate amount of sleep per day, and its results cannot be overstated.

Ideally, seven hours of sleep per night reduces the risk of stroke and heart conditions; any more or less than that proves to be the reverse, actually putting you more at a risk of getting these diseases.

Additionally, taking naps in the day from anywhere between 20 to 30 minutes has been shown to be beneficial in avoiding the problems mentioned above.

Yes, proper physical exercise; a healthy diet; and taking advantage of a bit of R and R all play huge roles in extending the lifespan of blue zone residents (and even perhaps yours), but there are other notable features that could be found in these communities that contribute to their overall longevity.

These include social, psychological, and religious aspects within their lives, which supplement and enhance their experiences. You’ll find these below.

The old adage goes, “where the mind goes, the body will follow.” And that holds no less true in blue zones. The people of Nicoya have their plan de vida; the Okinawans, on the other hand, live by the concept of ikigai.

Both pertain to a more contented and calmer mindset—to live life in balance and moderation— whose benefits extend physically, from a significant reduction in anxiety levels to lower risks of having heart conditions.

Influence from the people around you play a large role in how you develop as a person, which is why blue zone residents make the extra effort in providing one another with positive examples—or role models, so to speak— that each and every member of their community could emulate.

Aside from this, a certain esprit de corps exists within these places: residents treat one another as extended family and friends, providing positive experiences that not only benefit the individual, but the overall communities themselves.

In line with the communal spirit of these blue zones, one must not be surprised to find out that people living in these regions have very strong familial connections. So much so, that the extended members of families, such as grandparents, make up their households.

Closing the generational gap between individuals in a community allow its younger members to gain proper guidance and influence that come from their elders. These could include values that might be otherwise overlooked in modern views of society but are no less beneficial.

One particular trait one might find in blue zones that are mostly lost in modern, more urban population centers is the strict adherence and devotion to certain spiritual and religious beliefs.

This is in part due to the fact that religion, with its traditions and activities, cultivates a sense of social responsibility and positive communal experience.

As a result, psychological and emotional issues like depression are remedied through interactions with other members of any given community, all facilitated within the confines of religious settings, be they churches, mosques, or temples.

At first glance, finding out that places like these blue zones exist—where people tend to have longer and healthier lives— might seem like it’s been ripped straight out of mythology.

However, finding out the reasons behind their residents’ unusual longevity is as far from mystical as one might get. It’s all a matter of eating the right kinds of food the right way; balancing physical activities with rest periods; and keeping in mind that a healthy life involves our physical selves as much as our mental, spiritual, and emotional ones.

As such, there’s nothing keeping you from, at the very least, taking cues from what these blue zones have to offer and perhaps even emulating them to get the same results.

If nothing else, these blue zones provide great sources of inspiration for people looking to lead a healthier and longer life.