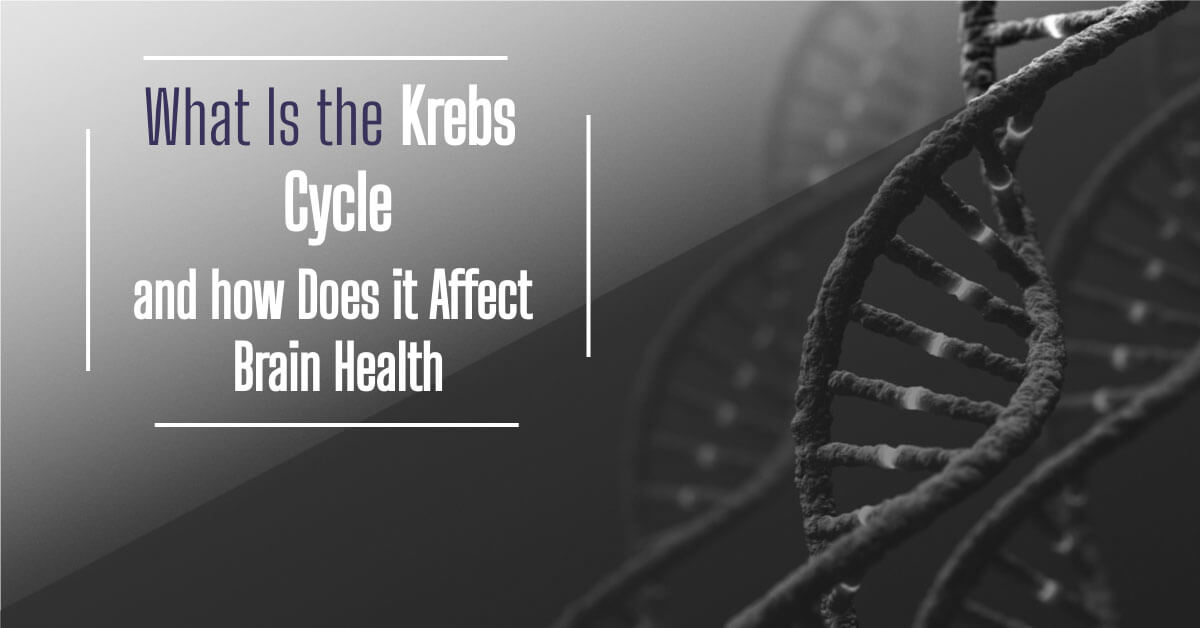 The Krebs Cycle is one of the most crucial series of chemical reactions to take place in the human body. The products of the cycle play an essential role in maintaining energy levels and brain health.

If you’re experiencing brain fog, chronic fatigue, or a general lack of energy, the cause could be an inefficiency in your citric acid (Krebs) cycle.

This article provides an in-depth examination of the steps of the cycle, the importance of its products, and whether supplementation of these products could help boost energy levels.

Also known as the citric acid cycle or tricarboxylic acid cycle, the process is vital to the survival of cells in humans, animals, plants, and fungi. It was named after Hans Adolf Krebs, who discovered and studied the cycle in 1937.

What Is the Krebs Cycle?

The Krebs Cycle is sometimes called the citric acid cycle because the chemical formed after the first step is called citric acid.

What Is the Role of the Krebs Cycle?

The Krebs Cycle is responsible for the aerobic respiration of glucose derivatives, fatty acids, and protein to produce energy, along with many other products necessary for building amino acids and adenosine triphosphate [1].

Where Does the Krebs Cycle Take Place?

The Krebs Cycle takes place in the matrix of a cell’s mitochondria. Most of the enzymes required for the cycle to take place are also found in the matrix, while some are located in the inner membrane of the mitochondria.

The citric acid cycle is essential to maintaining brain health and energy levels [2].

Unlike the rest of your body, your brain can and will use lactate as an energy source in the tricarboxylic acid cycle [3]. Besides energy, the most important product of the TCA cycle is hydrogenated NAD or NADH.

Does NAD Heal the Brain?

NADH is one of the final products of the citric acid cycle and is vital to brain health and functioning. NAD+ is a coenzyme that is of critical importance to all body cells, not only the brain.

However, NAD+  can counteract the effects of some neurodegenerative diseases like [4]:

With age, your NAD+ levels naturally decline [5]. Taking an NAD+ supplement can help increase your body’s level of this coenzyme and possibly improve brain health.

Despite brain fog not being a medical diagnosis, it can cause genuine problems for people who suffer from it, including:

Brain fog is caused by various mental stressors, including anxiety, lack of sleep, depression, and malnutrition.

Due to the positive effect of NAD on brain health and energy levels, taking nicotinamide riboside (NR) or NAD supplements could boost the levels of NAD produced by the citric acid cycle and help combat the symptoms of brain fog, and improve cognition and blood flow to the brain [6].

Let’s take a closer look at the various steps of the Krebs cycle and how NAD, NADH, and NAD+ are formed.

What Are the 9 Steps of the Krebs Cycle?

There is widespread debate over the number of steps involved in the Krebs Cycle. Some incorrectly believe there are only five, while others claim the actual number is eight.

The reasoning behind the eight-step process is because some scientists believe the Krebs Cycle starts when citrate is formed.

Others insist the first step is the oxidative decarboxylation of acetyl CoA. Some scientists believe this is an initial reaction and refer to it as Step 0.

Below are the complete nine Krebs Cycle steps.

1. Oxidative Decarboxylation of Acetyl Coenzyme A

Oxidative decarboxylation is the link between glycolysis and the citric acid cycle. For each glucose molecule undergoing glycolysis, two pyruvate molecules are formed.

Each pyruvate or pyruvic acid molecule, in turn, forms one acetyl coenzyme A, one NADH, and one carbon dioxide molecule, a reaction catalyzed by the pyruvate dehydrogenase complex, which is found in the matrix of the mitochondria [7].

Acetyl CoA moves on to the next step, which is where many believe the Krebs Cycle begins.

Also known as the condensation of acetyl CoA, this step involves the bonding of oxaloacetate, containing four carbon atoms, to the acetyl CoA molecule, which is a two-carbon atom compound.

Oxaloacetate bonds to the acetyl group in acetyl CoA. A water molecule breaks the bond between the acetyl group and the rest of the molecule, and coenzyme A is released from the compound. This step of the reaction is catalyzed by the citrate synthase enzyme [8].

This leaves a molecule of citrate (citric acid), which contains six carbon atoms, as one of the reaction’s products.

3. Reshuffling of the Citrate Molecule

A reshuffling reaction involves the dehydration and rehydration of a chemical compound or molecule. The reshuffling of citrate produces an isomer called isocitrate [9].

First, citrate undergoes dehydration to form cis-aconitase. Then, the rehydration of cis-aconitase produces isocitrate. This relocates the -OH group as a water molecule from one part of the citrate molecule to another.

This reaction is reversible and catalyzed by the enzyme aconitase.

The oxidative decarboxylation of isocitrate is the first of four redox reactions.

Redox reactions involve the gain (reduction) and loss (oxidation) of an electron. In this step, the isocitrate is oxidized, releasing a molecule of carbon dioxide and forming a molecule called alpha-ketoglutarate, containing five carbon atoms [10].

The second redox reaction in this step oxidizes the alpha-ketoglutarate and reduces another NAD+ ion into NADH + H+. A carbon dioxide molecule is released in the process.

The reaction is catalyzed by a complex of 24 enzymes known as α-ketoglutarate dehydrogenase [11].

The split between succinyl CoA and its CoA group forms succinate.

This reaction is catalyzed by the enzyme succinyl-CoA synthase [12].

The dehydrogenation of succinate forms a molecule called fumarate. This is the only dehydrogenation/oxidation process in the Krebs Cycle where NAD+ isn’t involved.

Instead, flavin adenine dinucleotide (FAD) acts as an electron carrier and hydrogen acceptor to form FADH2. The enzyme responsible for catalyzing this reaction is succinate dehydrogenase and is found in the mitochondrial inner membrane.

In some cases, the two hydrogen atoms attach to a carrier called ubiquinone to form ubiquinol instead of the flavin adenine dinucleotide. Either ubiquinol or FADH2 carries electrons to the electron chain and eventually enables the production of two ATP molecules [13].

In a reversible reaction, fumarate is hydrated to form a four-carbon molecule called L-malate. This step is catalyzed by fumarate hydratase (fumarase) [14].

The last step of the citric acid cycle involves the oxidation of L-malate to regenerate oxaloacetate. The reaction is reversible and catalyzed by L-malate dehydrogenase, which is found in the matrix of the mitochondria [15].

L-malate is oxidized, and NAD+ is reduced to form NADH.

The formation of oxaloacetate both completes and enables the cycle to start again. The NADH produced through reduction can participate in the oxidative phosphorylation of step six.

What Are the Products of the Krebs Cycle?

Each of the citric acid cycle products plays an essential role in bodily functions or other chemical reactions.

The most significant Krebs Cycle products formed by each turn of the cycle are listed below:

Guanosine triphosphate is a molecule similar to ATP that assists in protein and amino acid synthesis [16].

Although ATP and GTP have two closely linked pathways, the specific metabolic pathway of GTP is unique to the molecule.

One ATP molecule is produced at each turn of the cycle. That means two ATP molecules are produced for each glucose molecule that enters glycolysis.

Your body needs to produce ATP to provide energy for several functions, including [17]:

Three NADH molecules are produced from one molecule of pyruvic acid. NADH is critical for energy metabolism and gene expression [19].

NADH is often prescribed to treat symptoms of chronic fatigue syndrome, including [20]:

FADH2 is an electron carrier that acts as a high-energy transport molecule carrying electrons to the electron transport chain [21].

Two carbon dioxide molecules are produced from each turn of the citric acid cycle.

Carbon dioxide levels in the body must be regulated as the molecules play an essential role in blood pH maintenance, respiratory drive, and the affinity of the hemoglobin in your red blood cells for oxygen [22].

Excess carbon dioxide is expelled through your lungs when you exhale.

Below are some of the most commonly asked questions about the TCA cycle.

What Is the Difference Between the TCA Cycle, Citric Acid Cycle, and Krebs Cycle?

There is no difference between the three. The TCA cycle, citric acid cycle, and Krebs Cycle are all different names for the same process that uses pyruvic acid molecules to produce ATP or GTP that provides our body with energy.

The citric acid cycle is an integral part of, and the second step in, cellular respiration.

It uses pyruvic acid molecules, converts them to acetyl CoA molecules, and then inputs them into a series of reactions that eventually produce ATP or GTP, carbon dioxide molecules, NADH, and FADH2.

What Is the Main Function of the Krebs Cycle?

The primary function of the citric acid cycle is cellular respiration. The ATP produced by the cycle contains three phosphates. When one of the phosphates is removed from the molecule to form ADP, energy is released.

This energy is what allows the cells in our bodies to survive and keep doing their jobs.

What Are the Three Steps of Cellular Respiration?

The three steps of cellular respiration are:

What Does Citric Acid Do to Your Body?

Citric acid is not only produced during the TCA cycle; it can also be found in many foods like citrus fruits.

Besides its role in the TCA cycle, citric acid also provides several benefits to your body, including:

However, too much citric acid in your body could cause adverse side effects, including [27]:

How Do You Make Citric Acid?

Citric acid can be found in a variety of foods, especially fruits, including [28]:

Eating a lot of these fruits will naturally increase the concentration of citric acid in your body.

Another crucial source of citric acid is the citric acid cycle, where it’s one of the first chemicals created through the reactions in the cycle.

Despite the Krebs Cycle being a vital part of the body’s energy production process, very few people have a working knowledge of its reactions.

Although it appears complex at first, understanding each step of the process could help you get a better idea of how your body functions, produce energy and help you identify the cause of several adverse symptoms like chronic fatigue and forgetfulness.