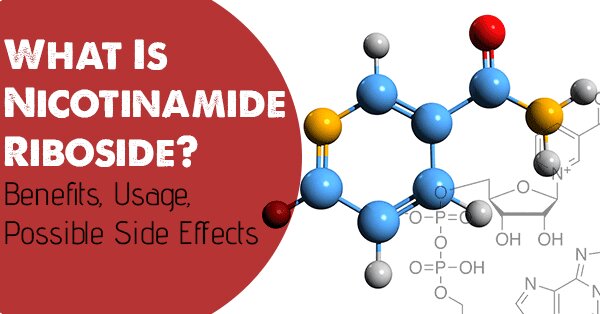 There’s a way to fight aging that doesn’t include a lotion, cream, or spa treatment—it’s a way to tackle aging from the inside.

We’re taking a close look at a wonder supplement, nicotinamide riboside, that has made scientists rethink what they know about aging. But is it effective and are there any side effects you should be aware of? Let’s dig in.

What Is Nicotinamide Riboside?

Simply put, nicotinamide riboside is an alternative form of vitamin B3. And, just like vitamin B3, it is a NAD precursor. This means it’s naturally converted into nicotinamide adenine dinucleotide, also known as NAD.

NAD levels tend to decrease as you age. Sadly, this is exactly when it’s needed the most.

At what age do you think NAD+ levels in the body begin to decline?

Nicotinamide adenine dinucleotide has a profound effect on the way your body rebuilds itself. Our body is constantly replacing the cells that make up things like tissues, organs and blood.

NAD levels are documented to restore this function to cells, and virtually reverse your genetic age.

What type of exercise do you think would most increase your NAD levels?

Nicotinamide riboside isn’t the only NAD precursor. Nicotinic acid, nicotinamide and nicotinic mononucleotide are also under the umbrella name of niacin or vitamin B3. The amino acid tryptophan is also linked to high NAD production [1].

Because nicotinamide riboside battles aging at the cellular level, it can potentially give relief to more serious illnesses, like cancer, Alzheimer’s disease and other age-related ailments [2].

Let’s take a closer look at how that works:

These are preclinical studies, so most scientists have used animals, like mice, to see these results. At present, there are many aspects about using this on humans that we don’t yet know. More studies are needed.

When we have increased NAD levels in our bodies, they can activate certain enzymes. One such enzyme type is sirtuins. In preclinical studies, this enzyme appears to improve health in animals and also extends their lives [4].

Sirtuins have been shown to repair damaged DNA, which increases your resistance to stress and keeps down inflammation.

It has been demonstrated that NAD is also a regulator of gene expression. In case you’re wondering, this is the process of reading genetic material and from that creating the molecule you need. Think of it as the building blocks of our bodies [2].

Lowers the Risk of Heart Disease

It was discovered that nicotinamide riboside supplements have a positive effect on vascular dysfunction. Vascular dysfunction refers to issues with your large arteries and they can lead to diseases of the heart and brain—common among our aging population [6].

Vascular dysfunction leads to several types of abnormalities in the functioning of blood vessels and, in turn, can promote the development of cardiovascular diseases like heart attacks and angina.

Another benefit is a reversal of oxidative stress, which is a disorder caused by many things including obesity, smoking, alcohol, medications, and even pollution [7].

Scientists believe that oxidative stress promotes the development of various diseases. These include chronic conditions such as Alzheimer’s disease, ADHD, Parkinson’s disease, and depression [7].

If nicotinamide riboside can reduce or get rid of oxidative stress, imagine the increase in quality of life for many of our older residents.

However, most of these results are from clinical studies into heart disease using animals and not humans. Before we get a definitive answer, we need more human trials.

Another thing that nicotinamide riboside does is alter your metabolism—essentially giving your body energy and strength to work harder, helping you lose unwanted body fat.

Using supplements consisting of nicotinamide riboside can help to raise HDL cholesterol levels—that’s the good cholesterol. It also, if you suffer from high cholesterol, has shown to lower the bad cholesterol [9].

It sounds too good to be true, but we haven’t talked about the big one yet: cancer.

5. May Lower Your Risk of Cancer

Increasing the amount of NAD in the body, using nicotinamide riboside, could be part of a strategy for getting rid of tumor-initiating cells (TICs). TICs are exactly what they sound like. They are cells that are able to renew themselves and have the ability to create tumors. Meaning, fewer tumors could equal fewer opportunities of getting cancer [10].

Note the use of the word “could.” To be sure of these effects, we need more human testing.

Side Effects and Potential Risks of Nicotinamide Riboside

Individuals who take therapeutic doses of 1,000-2,000 mg each day found they had no effects that were harmful [12]. Take note though, these studies were short-term, and so long-term effects could be different.

Once you’ve decided you want to give nicotinamide riboside a try, you’ve got to find the NAD supplement that’ll work best for you. Check out your local health food store or online retailers like Amazon.

But let’s look at how much to take and what to expect to find inside the supplement.

The brands that sell nicotinamide riboside generally recommend between 250 and 300 mg daily—usually one or two capsules, but that will depend on the brand you choose.

Other Sources of Nicotinamide Riboside

It’s always a good idea, before embarking on a regime of dietary supplements, to find out if what you’re getting out of the supplement can also be found in common foods. This way it would just be a change of diet in order to get similar results as the supplement.

What foods are already able to raise your NAD levels? Well, there are quite a few, and most of them are considered healthy eating already:

Not many foods actually contain nicotinamide riboside. However, you can find trace amounts in three places:

Another, and much less popular, way to boost your NAD levels is fasting. Intermittent fasting or taking on a low-carb diet is better than a drastic reduction in calories. For best results, do your fasting in moderation.

Maybe you still have questions—below are some of the most common queries about nicotinamide riboside.

What Does Nicotinamide Riboside Do?

Nicotinamide riboside increases the amount of NAD in your body. NAD is a coenzyme that we lose as we get older.

Some of the things that NAD does in your body include:

No human trials have found anything but mild side effects. These side effects included nausea, diarrhea, stomach and headache, indigestion, and tiredness.

But you should note that the tests were only short-term. We won’t know about any long-term effects until we can do long-term testing.

Yes. A study found that after a single dose of nicotinamide riboside NAD levels can almost triple the levels of NAD in human blood [5].

Human testing has also revealed that the increases in the blood NAD+ are dose-dependent—they go higher with a higher dose.

Nicotinamide riboside definitely raises the level of NAD in your body. But the real question is: do increased amounts of NAD actually reverse the aging process? The thing is, you won’t know if these supplements work until you define what “working” means.

These supplements don’t operate on a quick-fix basis. Taking a nicotinamide riboside supplement changes your metabolism, but there is no evidence that you’ll see any changes in your appearance from these products.

Because they work on your metabolism, these supplements are more likely to make you feel younger than look younger. They may also reduce the risk of disease and illness often associated with the aging process.

No, unfortunately, after a 12-week supplement regimen in doses of 2000 mg, a study found there was no improvement in obese, insulin-resistant male volunteers [13].

What Are the Ingredients in Tru Niagen?

Tru Niagen is a supplement that promises to raise your NAD levels. The ingredients in each capsule are 300 mg of Niagen, which is their patented product. Each 300 mg of Niagen contains 263 mg of nicotinamide riboside. The other ingredients, which are inactive, are microcrystalline, and hypromellose—these are both commonly used in medicines.

Because Niagen contains nicotinamide riboside, there is some evidence that suggests that it actually improves blood pressure. Patients with high systolic blood pressure—that’s the first number you get from your doctor—scored 10 points lower after using the supplement.

That 10 point drop in blood pressure is actually pretty impressive. It could translate into a 25% less chance of having a heart attack [12].

This evidence, however, comes from testing what the scientists described as “small and pilot in nature.” Meaning there’s more research needed before we hear any definitive statements about any benefit to blood pressure patients.

How Can I Increase My NAD+ Levels Naturally?

The number one way to raise NAD+ levels naturally is to exercise. This will boost your overall health and also increase the amount of DNA-rebuilding proteins you have in your body. If you exercise daily, your body will produce NAD+ to replace what you used up in your exercise routine.

Avoiding the sun is the second one. Too much exposure to the sun can cause you to deplete your personal stash of NAD+ because you’re using it to repair cell damage.

Restricting the number of calories you consume will also help. Also think about limiting or maybe even, removing alcohol from your diet [14].

First of all, nicotinamide riboside, as a NAD+ precursor, definitely raises the NAD levels in your blood. That has been proven.

For the rest of the claims, you can take more as “possible” benefits. There have been suggestions of benefits to many illnesses, like Parkinson’s and Alzheimer’s disease. There have also been “maybes” regarding preventing cancer, helping cancer patients recover, and improving renal function and mitochondrial function. More studies are needed, however.

In the meantime, it may be a good opportunity to assess how we look at healthy aging. Are we happy with just masking the visual effects? Or are we ready to attack aging from the inside?